The Current investing environment will test all of us. I can see that we are getting a lot of new activity on the site in the past few weeks. That is good. To the extent that you new people have looked through the blog Archives, you can see that one theme has been how the FED and funny money have increasingly corrupted investing since 1987 and especially since 2011. Sometimes I question why I still do this blog, it started out as a way to answer my kids market questions as I had closed the Chicago office in 2002. In the beginning of this website, in 2008, I was only 65 years old, now I am 77 and at this point have accumulated 53 years of market exposure in commodities, currencies, and stocks. I like to think that I provide a little bit of  offset to the happy talk that has been bred by the FED and has become the bedrock of what I call the CNBC Cheerleading approach.

I would add, that new readers may find my blogging a little difficult to embrace. I try to keep comments and the theme on a Macro basis and don’t blog every day, On the other hand in volatile periods my old background as a trader on the floor of the Chicago Mercantile Exchange between 1970 and 1980 can come back with some intense comments for shorter micro periods.

We hear a lot from Washington about the “Amazing Surprise”, “Amazing Emergency”, “Vicious Enemy” a situation that no one could have foreseen. Luckily we have “Great Doctors”, and a belief that the “Economy will Sky Rocket as soon as the War is over”.

With all that talk as the current background, there is a book out there, written in 1997, “The Fourth Turning” by William Strauss and Neil Howe. It is a worthwhile read. It is part of a series of books Howe has written with others that is based around history and generational change. This book goes into generational change that will evolve into a turbulent period of major change between 2005 and 2025. It further explores how this period will be characterized by groups of participants having vastly different ideas and views, and each group believing they are absolutely right.  This has to be the case as a new paradigm becomes the norm.

Just to put a personal cast on the culture change I have experienced, and to use the term we hear so much on cable, “let me be clear about this”, I was a Goldwater Young Republican in my first election, 1964. Over time I was mostly a Republican, did vote for Carter because I could relate that to my farming and religious early background. But in 2003, while watching Powell lie at the UN to justify the Iraq War I switched to the Democratic party and became loosely involved in the Howard Dean effort. Going forward Obama got my support, with the Affordable Care Act being his best effort, not firing Bernanke his worst non-decision. Currently I support Elizabeth Warren and will appear to need to support Biden, not the best idea person out there, but a compromise in the effort to move the change effort forward. Hopefully he will name Warren as his VP choice.

To me Trump was a needed brief component to the change that the country is going through. We needed to see how bad things could get.

Getting back to the Market

This week we have outlined some important technical and fundamental market points. Yesterday we did run a little “Worst Case Scenario” through one of our models. The current chart output of this model was shown in the blog yesterday. Todays, chart shows this same Model Chart but with hypothetical worst case inputs, one where Assets (stocks and Commodities) are shown down big, and Financials (bonds and gold) are shown up big.  The chart uses yesterday’s prices as a base for the change in hypothetical prices, with the S&P down 40 % (1550 on the S&P), Commodities down 20 % (100 on the CRB index), and Bonds and Gold up 20 %. We used those prices after making a few runs through the data in order to get the blue Big Picture Ratio to reach a chart objective. 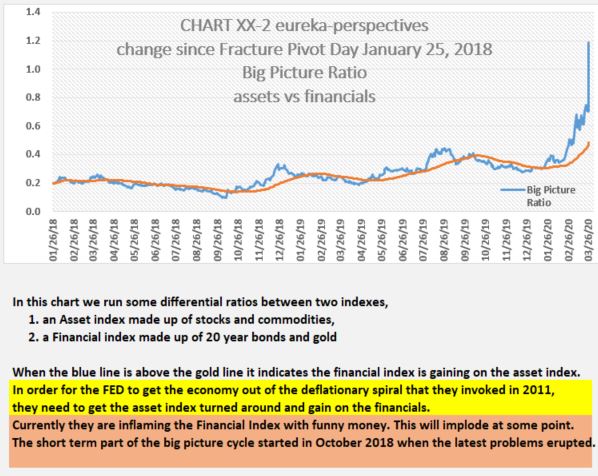 In closing, we are keeping our position levels conservative at this time, about half of what we carried through the crash over the past two weeks. This is because that while the Macros show projected price changes along the line of what we inserted in the model, one has to keep in mind huge efforts to move things in an opposite direction.  We will try to provide daily thoughts on any changes to the macro view.