But if you read between the lines here you will see where out thoughts and opinions are headed.

It would appear from the recent pattern of hits on our site that most investors are trying really hard to keep their heads in the sand.  That will probably be OK until some things really happen to the economy and markets. The bulls are rightly saying that once a bear market is declared, (down 20 to 30 %) one should be a buyer most of the time. So true. It takes a 40 to 60 % decline to get real attention.

What about that Macro Picture ?

Back in October 2018 we outlined the features in the topping and ending of the (2000-2018) 17.6 year economic cycle and how it fits within the 72 year cycle. I believe the new 17.6 year cycle which started in October 2018 will show itself to be a Bull Cycle eventually.  Unfortunately the first 3 to 6 years of this new cycle will probably see a time of uncommon weakness as the issues built up over the past 36 years and especially over the last 7 years are dealt with in total.  This will all rollout as the world economy builds a new solid base.

Macro Technical Analysis Points to Confirmation of a Bear Market Cycle of between 3 to 6 years from the September 21 S&P High of 2940.

Looking back on the 2007-2009 Macro Rollover of the market for reflection:

Consolidating after the Breakout

This is probably the biggest aspect of the current short term trading environment.  After the F-2 Fracture Breakout on December 11 the Fracture Line peaked on December 21st and has been consolidating sideways since.  This aspect will probably continue until more information is seen.  The employment numbers on Friday are probably a validation of how much the Make America Great story has drilled itself a hole that cannot be filled with anything but vapor. 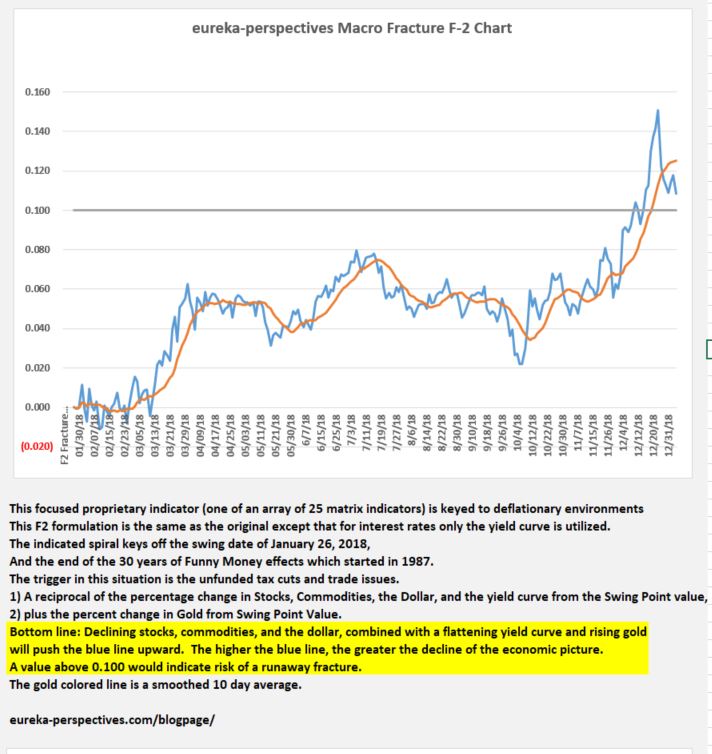 And How About the Yield Curve ?

The yield curve after flattening dramatically between January and Mid-July 2018 has treaded sideways as the FED has hit a wall on raising short rates and the impending Macro decline has yet to hit the 30 yr yields.

So back to embracing the Turbulence,

Since we are in a Bear Cycle Now, we are using 3X on our Short Trades and 1X on our Long Trades..

Passions are running deep on both side of the equation, this is a Contrarians Dream..