The stock market has been consolidating since late November and is set up to make a move, which most anticipate is for another leg higher.  Today’s employment report is supportive of that kind of move.

So lets look at the other Macro areas.

T-Bond prices which are tied to the deflation wave, may be ready for a little setback. Over the past year Bonds have gone from a low of 123 to 153.  A 38 percent decline here would lower the market to the 141 support area.  The Macro is UP.

The DBC commodity ETF has declined from the 127 area to the 120 area, is open to a rally to the 123 resistance area.  The Maro is DOWN.

The Dollar which has seen a rally from the $ 79 area to the $ 96 area could see a normal back off also, maybe to the 90 support area.  The Macro is UP.

So what does one do when we could be entering into a reactionary period.  Are the potential micro moves worth one getting involved?  That is up to you.

The dollar is the one market over the next couple of years that we see having the most potential, with an extreme high value of $ 180 a possibility.  When ever the FED does raise rates will be the igniting factor.

Also as to stocks one should keep in mind that 4th quarter US GDP was not that strong and corporate earnings were 5 percent below 4th quarter 2013 while stock prices are substantially higher.

As the title says, this will be dicey, the next FED meeting will be important. And if these reactionary moves do not occur, watch out because everyone is on the same side of the boat and there are not nearly enough life boats.

Performance numbers are seen below, lets see which portfolio pulls away in the coming days.  So far cumulative returns on a daily basis over the past 16 days that we have been posting them have seen EGH on top 3 different days, EAH on top on 6 different days, and the stock market on top for 7 different days. 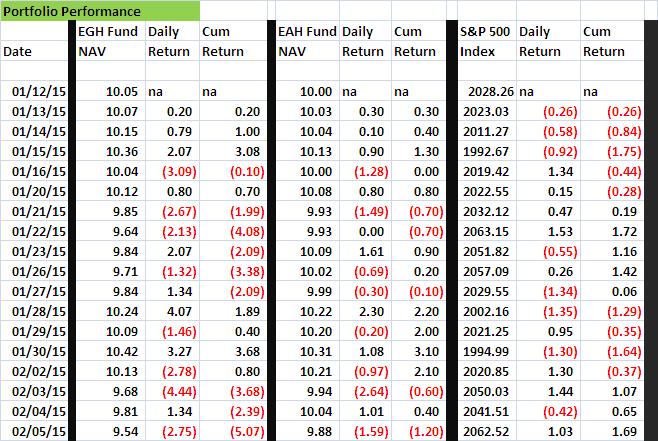