Wake Up Call still waiting in the Wings

More of the same.  Jobs report tomorrow, the market is not worried, it thinks it will be a good report, over 250,000 new jobs, but if it isn’t, Janet will step to the plate and reassure it.

Today’s letter from Mauldin Economics written by Jared Dillian, seems appropriate with what we are seeing in the Oil relief rally.  Here is a piece of that letter:

The buzz has been building on this trade for weeks. Clients, friends, people on Twitter, everyone I know has been waiting for a chance to pick the bottom in oil.

I’ve heard all this chatter on which triple-leveraged oil ETFs to use (I make a point of not knowing such things). They’ve been waiting for this opportunity since oil was at 80 bucks.

Interestingly, they could have shorted it when it was at 80.

Actually, they could have shorted it at 110.

Or 50. They could have shorted it at 50 and still made money.

But they waited this entire time, watching passively as oil plummeted over 60%, to play a 10-point bounce over the course of a couple of days.

Well, the mean reversion monkeys, as I call them, will tell you that they just made 20% in three days. Annualize that!

Problem is, it doesn’t work that way, because you can’t flawlessly pick every bottom. I was a mean reversion monkey once, and for every time I made 20% in three days, there were three other times I almost got carried out—like that time in 2008 when I tried top-ticking the Canadian dollar. That one was painful.

And here is our portfolio Performance update: 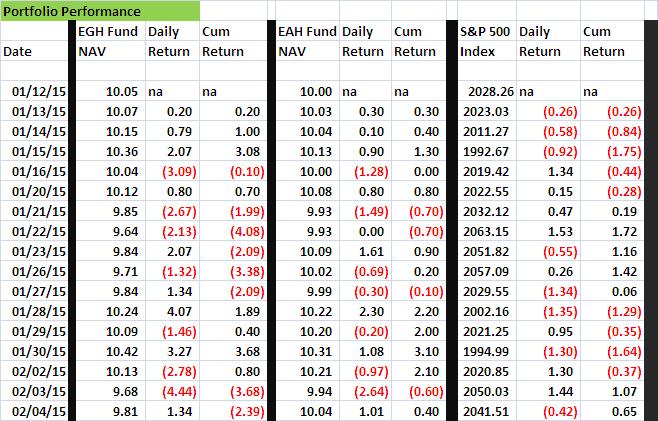