Why no big inflation?

There is a lot of lamenting the fact that we have not seen much inflation since the 2008 Crash and the FED should not be raising rates.  I would point out three things:

I will give credit here to text in Kerry Balenthiran’s  book “The 17.6 Year Stock Market Cycle”.

Mills believed in the business cycle there were three periods after a panic:

1. Post Panic Period where trade and credit is restricted.

2. A Revival Period where trade and employment slowly pick up.

3. A Speculative Period where new businesses are started, cheap credit is easily accessible, and capital is mis-allocated , leading to a bust.

Our view on this last economic Panic which occurred in 2008-2009, was that the FED’s actions bypassed the Revival Period and went straight to the Speculative Period.

And now we have the Bust.

Since January 26, 2018 we have been beating the drums on the fact that we are in a Speculative period that will not end well.  In order to do that we have been showing our Fracture Charts periodically, Here we have the F-2 version of the chart which is probably easier to comprehend that the inverted F-3 chart. 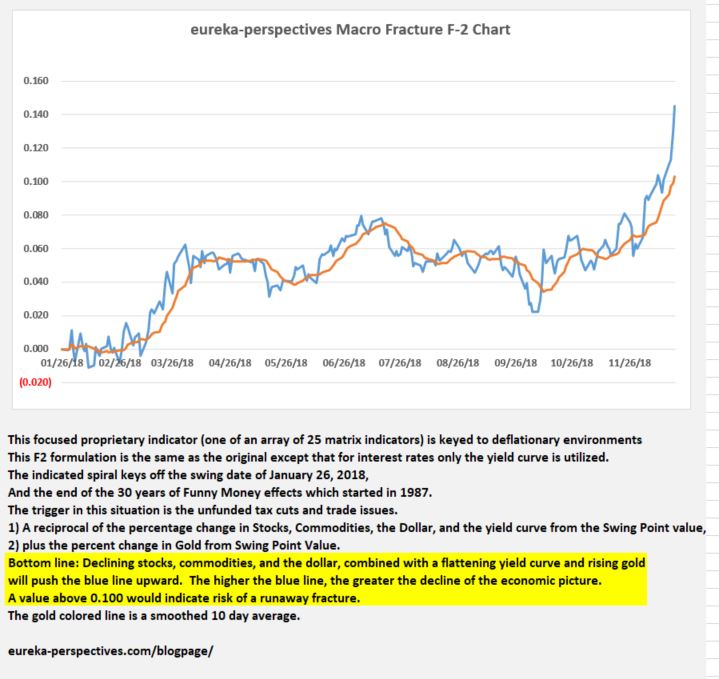 Where are things Now?

Obviously the Trump Tax cut bill and the Trump Tariff policy are providing more cross currents and triggers to the bigger picture outlined above.  Here was our response to Jim Cramer this morning on Twitter.

So what does one do now?

The markets are under pressure and the S&P is probably on a stepping stone down through the 2460 then 2370 area on the way to first real support at 2125.  A rally from any of those areas is possible, but the psychology has shifted from a few weeks/months ago.