If you are a regular reader of our comments, you know what we believe are the main factors that were behind yesterdays market action.  Two factors stand out, 1) Bernanke’s years of QE’s that created a cloud of artificiality in which the markets do not know what is real, and then the trigger set off last week, the Government deficits set off by the Trump Tax cuts which will now have to be financed.  Sure Tariff’s add some pressure, but the Public Villain being put out front by Trump and CNBC’s Cramer, the Fed, is just cry baby talk.

If you are interested, look back at our comments of 2/28/18 concerning Fed Chairman Powell, he is probably the only adult in the room these days.

One interesting point concerning the Fed in this short term scenario is the fact that after the Government tax influenced deficit was announced last week, the main thing that occurred was that the yield curve steepened, that was not Fed action, that was market action.

What occurs now will probably follow in the same mode as the last 9 years, the Treasury War Room, especially led now by Mnuchin with Kudlow looking over his shoulder, could come into play if things get out of hand.

But for most of the kids trading today who were born after 1977 and have no clue as to how fast the 1987 Crash happened.  Here is a little primer..

Here is the F3 Fracture chart updated through today’s open.  Probably the most important comment is that the Fracture, if there is going to be one, has not started yet, the lines have just moved back into middle ground. 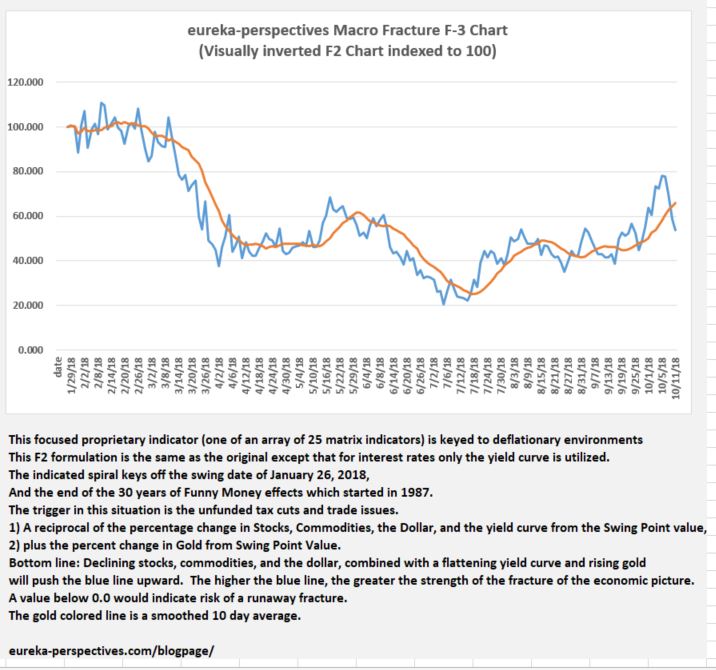 One Response to “The Blame Game”