Key issue, the “Goldman Sachs” has no experience running a country

The real story is the marketing of “the hope of trickle down” that is being managed by his Goldman Sachs guys, Steve Mnuchin and Gary Cohn.

The problem is, “the Goldman Sachs”, makes most of its money preying on others and various events, not building positive scenarios.

Low inflation and low growth have been a real problem since the Great Recession grew out of the 2001 – 2007 “buy an extra house” economic plan to pay for the Iraq War.

Bernanke’s idea of turning things around by adding a big pile of “funny money” to the mix has only brought an asset value explosion.

Now the new trio, Donny, Stevie, and Gary, have another half baked idea that initially is piling on to the Bernanke “Pile”.

So we will watch things unfold, todays GDP rollout is probably a good example of what we will see, lackluster export numbers regardless of a declining dollar and a generally unimpressive business environment.

I would expect that rising short term interest rates will end at mid-year and I would not be surprised to see GDP numbers for the second half of the year to be under 2 %.

For the “Real Picture”, one might try looking at the under pinning’s of the economy.

Let’s Look at the Real Numbers behind Economic Activity, the CRB commodities chart going back to 2007.  This is a chart of the area of the economy that has not been manipulated by the FED or the Administration.  You will notice it has just bounced back to the 2009 lows. 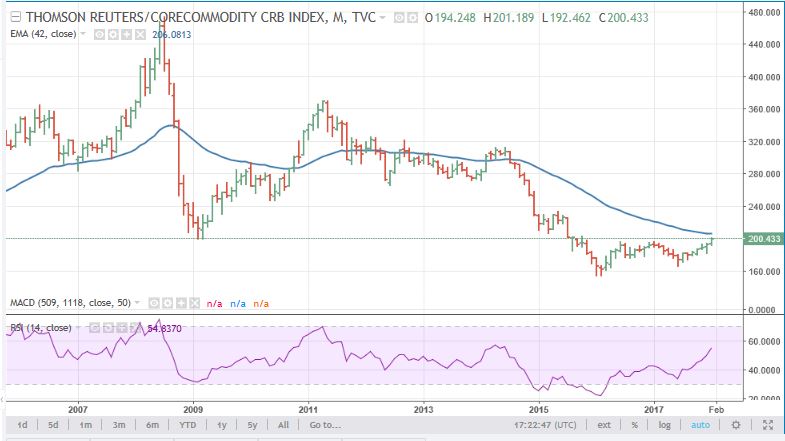