This year we will approach our outlook with essentially the same methodology as last year.  Price projections will be based on current trend direction with a high – low band based on expected volatility.  In 2012 we expect volatility to be somewhat less than 2011 but more than the less volatile periods before 2007.  We state that volatility as a percentage number of the underlying price.  You can see the number we are using in the second column of the table.  This year we are basically looking for trading markets and are not looking for strong trending situations like were seen before 2000 and between 2003 and 2010, both up and down.

In the two columns on the far right of the table we have calculated the percentage move that the market would need to make (from the January 10, 2012 close) to reach the outlook high or low for the year. 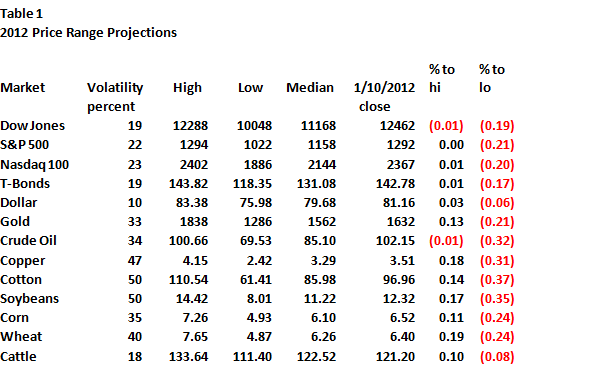 We would suggest using these numbers as guideposts.  You will note that the stock and oil markets are pressing against expected highs.  Regardless of which Macro view you focus, what is important is watching how the market acts when it hits a projected high or low area.  Does it back off or does it power through, that is what is important in adjusting market positions to an overall strategy.

FUNDAMENTALS UNDERLYING OUR CHOICE OF MACRO VIEW CHOICES ABOVE.

1)  The trend to austerity and cutting deficits in Europe and the US is probably the biggest macro force.

2) The U.S. Economy will continue a modest recovery and look good compared to Europe and emerging markets.

3) Interest rates will be caught between upward risk pressure and continued FED down pressure.

4) The dollar will be generally strong and continue higher for a while but will not make major headway until the Fed takes the pressure off interest rates.

6) Commodities, the Ag’s, copper, etc, have generally made macro double tops, 2008 and 2011, and while bounces from low levels in fourth quarter 2011 are probable, the main influence is more downward pressure.

7) Austerity and modest upward risk pressure on interest rates will in general keep stock and commodity markets from exploding on the upside.  At the moment the charts point to a belief on the part of investors that the large – cap multinationals will benefit from emerging market strength.  That is ironic as rising interest rates will affect Europe and emerging markets the most.  At the same time the NASDAQ 100, the techy area, is looking tired and if there is a problem with 2012 markets, it will show up here first in my opinion.  All that said, the fourth quarter 2009 market levels should contain any downside misfires during this election year, ie. I don’t see a double dip in 2012.

8) Beyond the austerity macro force the U.S. Election will be the other market force.  A generally weak Republican slate could win if it can harness the anger of the middle class.  The Ron Paul charge is a warning shot to a FED that has acted for the past 25 years like they had an open mandate to use inflation as a remedy for weak fiscal policy.

9) To me there is no doubt that the under 35 population is more conservative than their parents.  They have watched the end and rollover of the 72 year economic cycle over the past 15 years and are looking for answers for their lives.  The over 6o population is just trying to hold on.  And lastly the 35 to 60 year population is in turmoil and will be pivotal in the 2012 Election as they try to reset their lives.

10) Obama’s crowd still doesn’t get it, Harvard ideas will not play in this election. In order to win they have to harness the anger of the middleclass and regain the grassroots that Howard Dean worked so hard to develop. To date that direction lacks solid leadership. They will have to turn that anger into positive forces in order to win. To Obama’s benefit is the fact that little economic things are happening everywhere, wars are ending, alternative energy production is increasing, the U.S. Auto industry was turned around, and government employment costs are declining.

Republicans have had the benefit of many debates that have allowed the kooky ideas to be shown for what they are and the result may be something new that will resonate with middleclass voter’s sensibilities. Unfortunately this will more than likely not be to the voters long-term welfare.  In the end Trickle Down Economics will have Austerity Based Growth added to the infamous list of Economic Magic.