Looking back we can say we got it half right in 2011.  Our expectation that volatility would decrease from the prior three years did not happen, especially with commodities and the QE2 effect involved. On the other hand our contention that we were not moving into major new bull markets proved correct as stocks essentially closed unchanged for the year.  Gold, cotton, crude oil, corn, and T-Bonds all had highs which were more than 10 percent above our projections however our projected lows were much closer to the actual with a miss on average of only 4 percent.

Everyone who attempts to forecast a period of one year forward always says they are not sure why they attempt something that is basically unknowable but then go ahead and do it.  I guess I am in the same camp.  Because I like to tie politics with economics and then by definition the markets, I think the overall umbrella of factors that will have the most effect in the coming year come out of the 2010 elections.

1. First, the period of basic reform is put on the back burner.  Obama is embracing the Clinton approach and is including a number of Clinton people, Sperling and Daley, to name a couple.  Volcker is out.  Election 2012 is on the horizon.  This is calming in the short term and the addition of Jeffrey Immelt from GE to direct employment increase options adds to this environment.  The irony is more long-term in its effect.  Immelt has been one of the prominent executives sending jobs overseas and the Clinton people with Greenspan’s help led us into the first big bubble.

2.  Bernanke can now sit on the sidelines for the most part as it becomes clear that his move to do QE2 was because the market sell-off into the S&P 1050 area last summer scared the hell out of him.  He saw a double-dip on the horizon and knew he had to get the stock market pushed higher, now he can sit back confidently and watch.

3.  State and local government tightening whether through reduced employment, reduced benefits, or raising taxes will be a significant drag on the market.

4.  It has become clear that the Republicans in Congress will probably not do anything that will have a big effect on the deficit or the markets.  Currently they are talking about $ 100 billion of deficit cuts after just being part of a $ 800 billion dollar deficit increase in the lame duck session.  A recent ABC poll tells it all, 56 percent of the population wants deficits reduced and 56 percent of the population thinks that deficit reduction will not affect them.  It is always the other guy.

The bottom line for the economy is a lot of offsetting factors that will reduce price volatility for the most part in stocks.  Employment increases should unfold yet corporate earnings will stagnate under increased pass through costs.  Gold and commodities which have seen the most long term volatility in the last year, especially since QE2 was announced, will see the most action.  I think most markets are near or have seen the highs for the year.

The two tables below are based on a view of the Macro cycles and their important support and resistance levels.  The forecasts are based on the volatility of prices around those points.  Table 1 shows 12 month volatility numbers from a number of different perspectives.  Column A shows approximate annual price volatility in percent readings from 1980 through 2007.  Column B shows the lowest past year’s volatility while Column F  (D and E were deleted for space) shows volatility for the past year.  In column G,  last years volatility divided by pre 2007 volatility,  you can see that volatility for most markets outside of gold and commodities were relatively normal.  Gold and commodities were however the biggest recipients of speculative action.  In column H,  I show my forecast for volatility in 2011. 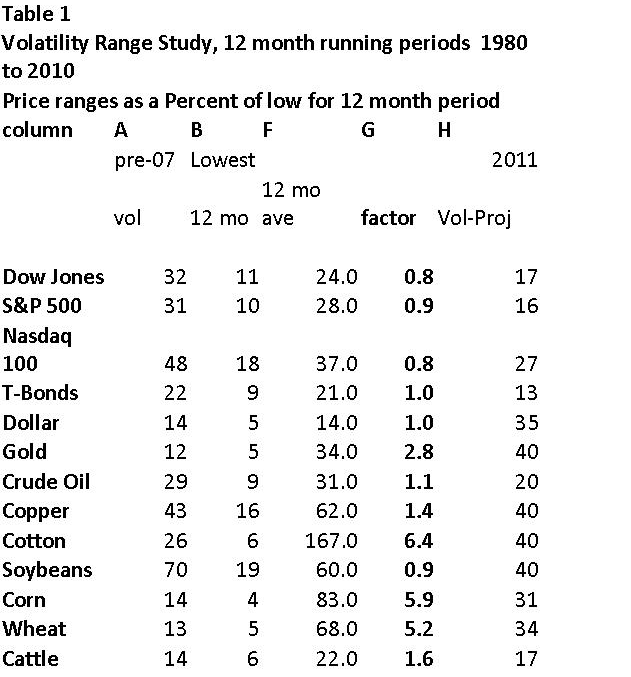 In Table 2, I apply those volatility numbers to prices now. 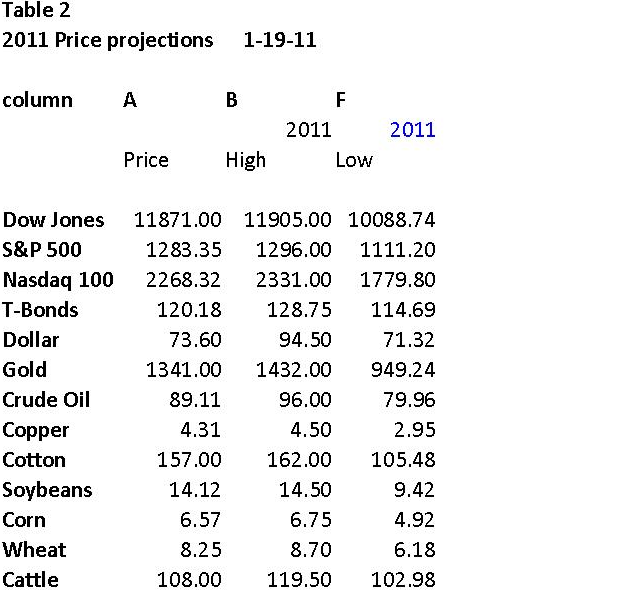